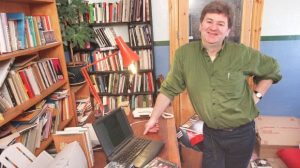 Philip Casey, writer, poet and playwright, has passed. London-born, Wexford-raised he was a friend.

We first met in the home of image-maker Gene Lambert. I was helping Gene stretch a canvas for an imminent Michael Farrell exhibition in Paris (‘framing Farrell’ we joked) and hung around for coffee and discussions on images, art and propaganda.

Casey, an amputee, arrived to be photographed by Lambert for the photographic exhibition Work from a Darkroom, for which Lambert later won awards.

I later wrote a poem on some of the images (See Dead Eyes, Hanging out on the 11th Floor.)

We discussed writing and poetry and Philip asked my opinion on an analogy he made in one of his poems, Late Consequence, between the Nazi concentration camps and Irish political prisons. He had been criticized for the comparison.

I told him I thought it was valid in the context he explained. Although there were many dissimilarities, there were enough parallels. We discussed how people grabbed at any excuse to avoid difficult issues, issues apparent to their eyes. Existing widespread denial of reality is borne of a political agenda we agreed.

I invited him to review some of my poetry and he came around for dinner and conversation in English and Spanish (which he had learnt in Barcelona over a three-year period). There were many readings and muchísimo vino.

Talk meandered but at one point settled on Shakespeare. At the insistence of Philip, and to the delight of my ten-year-old son, we circled the table now transformed into a bubbling cauldron. Us three, gravely reciting the witches’ song from Macbeth, ‘double, double toil and trouble,’ with suitable witch-like face contortions, circled the boiling broth. And very good he was too, all the more real with his crutches before we all collapsed on to the sofa in giggling laughter. But, as intended, it was an indelible entry to theater for my son.

Later, he showed my verses to Dermot Bolger and they both responded with their helpful views that encouraged me to keep writing.

Diagnosed with cancer in his groin at age two he survived due to extensive radium treatment.  At age ten he spent three years in hospital following complications. Never idle, he learnt to play the guitar there. When he was 21, delayed complications resulted in a leg being amputated below the knee and, ten years later, a further amputation followed. Philip knew a lot about pain, but he never raised it with me. I knew him only as friendly, witty, compassionate and diffusing a stillness that belied his gregariousness.

This bed upon which I lie

has taken so many bodies upon it

that it’s fit to hitch up its sheets

and lean its backrest against

‘Do you want a good time,

I can fix you a petit-mort

before you know where you are!’

While in hospital at the age of 14 (recovering from a kick from an animal) he read Ulysses. Philip befriended a fellow patient, Paddy Doyle, during his three-year hospital sojourn and subsequently persuaded Raven Arts Press to print the bestselling God Squad by Paddy. The free online resource, Irish Writers Online, was his brainchild. Philip was a member of Aosdána.

‘….I sit in solitude

(From An Inmate Makes Notes, After Thunder)

Tried and Sentenced (2014, Amazon,) translated into German and Japanese by Noriko Ito,