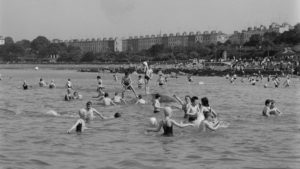 I am early-walking the path behind the sea-breaker wall, close to Dublin’s Salthill train station, accompanied only by my intimate shadow. A mechanised voice from nowhere stipulates how I should take care of dog poo if I am walking a dog.

I identify the source of the celestial voice: motion detectors triggering speakers along the perimeter fence of the station. The sound is obtrusive, unlike the strangely comforting and lullabying chug-chugging of a passing train in the morning sunlight.

The official voice clashes with other voices in my head, echos forward from 1957 when I was seven: the sound of splashing laughing excited children on the now empty shoreline and, above all, the distinct voice of my mother, this time calling my brother and I back up from the edge of the sea.

We are circling an unfortunate boy whose sunburned peeling skin is fascinatingly flapping in the sea breeze. Occasionally, oblivious to our temporary cruel streak, we had been tugging a piece here and there to see what happened.

Distracted now by my observant mother’s calls for sandwiches we race, our bare feet sliding on the sand, gritting our toes, until we reach the edible hoard on the blanket by my mother.

Soon my brother has disappeared as I attempt to build a dry sandcastle and engineer a solution to the crumbling construction. My mother is sitting cross-legged on the blanket practicing her strange new hobby of Yoga, impervious to strange looks from other adults along the beach.

Instead of the large ‘X’ marked on a piece of paper fixed to our sitting room wall at which she fixed her long stare during her Yoga sessions at home, now, on the beach, her eyes are fixed on the blue horizon. Her eyes become agitated and she rises calling out my brother’s name and waving her arms.

My brother is lying on his new rubber dingy, won  in a national art competition, paddling straight out from the beach, closing in on the horizon.

My mother’s anxiety is palpable as my brother heads out to sea, possibly heading to Africa so he can commence his ambition of hunting and capturing wild animals for international zoos.

My brother eventually turns to float parallel to the beach and my mother sits down muttering about my brother and what waits in store for him when we return home and my father hears of this. I suspect the confiscation of the dingy is inevitable.

Unlike my artistic-hunter-brother and Yogist mother I contemplate my own absence of any identifiable ambition, despite my young age, as I walk the beach to join the other children at the ebbing surf.

But I hoard the memories of the sharp smell of the salt in the air and the sun block cream on my skin; the excited calls of playing children competing with the cries of overhead gulls; the cold, cool rushing sea on my  thighs, the tickling seaweed and the warmth of the hot sun on my back; and the early-warning comforting voice of my mother calling after me that we will be leaving shortly for home. I hoard them all, listening to some internal unconscious voice that states I must try and remember everything, that I will need the memories again in the future for some unknown purpose.