On the 50th anniversary of the death of Brendan Behan  I recall it is too late to talk to him about his writing. He is dead. But he was alive when I first overheard my parents discussing him.

My father, Deasún, and Brendan, were fellow writers in among other publications, The Bell, perhaps the most important Irish literary and intellectual journal in the twentieth century. Both writers shared radical political and literary thoughts. They always conversed in Irish, which they had both learnt recently, post school.

Deasún spoke well of Brendan. “Fear le croí” (‘a man with heart’) my father said, going on to recount of a particular time when both writers were walking down a Dublin street on the way to or from Glasnevin Cemetery. There an Easter Commemoration is held annually in memory of those who had given their lives in the struggle for Irish freedom.

Brendan suddenly stopped mid-conversation to greet an old woman in a shawl. He emptied his pockets of cash which he gave to the woman. “She was very good to me when I was a child,” he said by way of curt explanation.

However, I do have a very vague recollection of seeing his world-famous play ‘An Giall’  (later translated to ‘The Hostage’) with my father, when Brendan was still alive. Occasionally my father took me to Dublin’s Damer Theater where I recall, once, being traumatised watching ‘Waiting for Godot’, in Irish. In vain I waited for something to happen, but ‘sin scéal eile’ (that’s another story).

In the mid sixties, Brendan was by then dead and buried. I was still a student and only an occasional writer. Like both Deasún and Brendan I was a radical republican. I enjoyed Brendan’s novels Borstal Boy and Hold your Hour and Have Another and his satire and political commentary style in the reproduced Behan columns published in The Irish Press.

A friend sent me the articles. I was in boarding school, where I lodged for a few years, and, like many other news cuttings, it was ensconced in the center of my algebra book, which I had no interest in studying. I heard Brendan on radio sing The Captain’s and the Kings and The Auld Triangle-the latter which I adopted as a party piece. I was known, on occasion, to sing it at the top of my voice in Garda (police) holding cells, sojourning in punishment for exercising one’s civic duty of social complaint on some issue or other.

Indeed, I had occasion to pass the very same large metal auld triangle which was beaten daily in Mountjoy Prison to waken the inmates, but, again, as they say in Irish,  ‘sin scéal eile’ (‘that’s another story’).

Of the many stories on the  adventures in advertising of Brendan, the third example below is my favorite.

“What brings you to Canada, Mr Behan?” “Well now, I was in a bar in Dublin and it had one of those coasters, and it said ‘Drink Canada Dry’, so I thought I’d give it a shot.”

Guinness asked Brendan to come up with a slogan and gave him a few crates of the product to assist the flow of artistic juices. The Guinness men returned next day hoping for a gem of an advertising slogan, as the story goes, to find Brendan stretched out drunk a midst empty crates and crumbled bits of paper. “I’ve got it!’ exclaimed Brendan, ‘Guinness makes you drunk’.”

As well as being a writer Brendan was also a house painter as distinct from being a painter of art which he might well have been had he ever attempted it.

In Paris, he promised to paint a restaurant in exchange for room and board. A fortnight later nothing was painted, to the consternation of the owner.  Behan was about to exit Paris and his rooms. A challenge from the owner was imminent when Brendan stopped and scribbled at the entrance the words that later, reputedly, brought fame and fortune to the restaurant owner: ‘Brendan Behan ate here for free.’

He delved deeper into the vernacular to comply with another Parisian signage contract: ‘The best fucking bar in Paris.’

“What is the purpose of your visit to Spain, Mr. Behan?” they queried at the Iberian customs.

“I have come to attend General Franco’s funeral.”

“But the Generalissimo is not yet dead.“

On Ireland’s eastern coast, south of Dublin, I often stroll along Killiney Hill, near the castle where Brendan used to train in explosives  when he was in the illegal Irish Republican Army, before going to England, to his incarceration and to the birth of Borstal Boy.

Conversing with Clio and the other Muses, I am overtaken by the beauty of Ireland’s ‘Bay of Naples’. As I pass Shaw’s cottage, I smile at the echo of Behan’s words as I take in the breathtaking view of Killiney Bay where Brendan, and separately, Deasún and I sometimes swam. 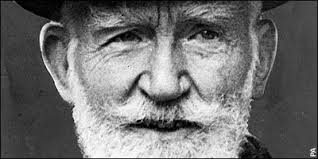 As a teenager, I came across correspondence in Deasún’s desk between himself and Bernard Shaw which I have not seen since. The name of Shaw was familiar to me of course particularly as, at the time, I had only recently seen Kirk Douglas and Burt Lancaster in The Devil’s Disciple, based on a Shaw play. But, alas, I cannot remember much of the topic of the correspondence except that I recall something about censorship.

Shaw, or Bernard, as he preferred to be called, equated ultimate censorship to assassination. My father was strongly opposed to censorship all his life. Classifying the writings and letters that remain in numerous unopened boxes since my father’s death will, I hope, bring the correspondence to light.

As I stroll past the heady fragrant eucalyptus copse near Shaw’s cottage, Bernard, Brendan and Deasún, writer’s and socialists three, are often on my mind as I contemplate writing and some of Shaw’s words: “Only on paper has humanity yet achieved glory, beauty, truth, knowledge, virtue, and abiding love.”