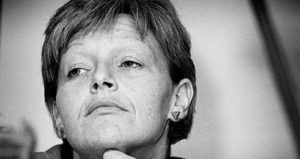 Not long before journalist Veronica Guerin was shot dead in Dublin in 1996 we met while participating in a radio talk show on Ireland’s illegal drug epidemic. Subsequently she and I discussed sleaze and bribery in the Garda Síochána, Ireland’s police force. We agreed it needed exposure. She confided she was working on a particular investigation of police corruption as we spoke. We agreed to keep in touch. The precise target and results of her investigation remain unpublished to date.

I was driving past Ireland’s national television and radio broadcaster, Radio Teilifís Éireann when a newsflash came through that a woman journalist had been shot dead in Dublin. As I pulled over I guessed, sadly, that it must be Veronica. She had many enemies on both sides of the law, neither of which balked at murder if the stakes were perceived as being high enough.

Within twenty four hours two policemen were at my door wanting details of any and all contact between us and what we had talked about. It was the usual soft cop, hard cop routine, one being all professional while the other aggressively threatened to return with a search warrant if I insisted he remove his foot from inside my apartment. I refused their invitations to divulge the content of our confidential discussions about corruption in the Gardai.

I was reminded of all this recently watching When the Sky Falls, a movie on Veronica’s life. It stars Joan Allen and is scripted by Colm McCann, Michael Sheridan and Ronan Gallagher. Ronan and I worked together for a short while developing a movie on Bloody Sunday.

However, one of those involved in the project left to continue the project alone and  then teamed up with with Paul Greengrass for Bloody Sunday, eventually winning the Audience Award at Sundance, the Golden Bear at the Berlin International Film Festival, the Hitchcock d’Or best film prize at the Dinard Festival of British Cinema.

The production of a second movie Sunday by Jimmy McGovern over-crowded the field and Ronan and I dropped the project.